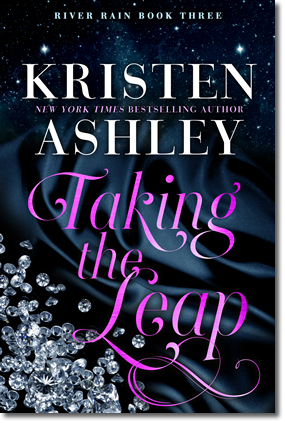 Alexandra Sharp has been crushing on her co-worker, John “Rix” Hendrix for years. He’s her perfect man, she knows it.

She’s just not his perfect woman, and she knows that too.

Then Rix gives Alex a hint that maybe there’s a spark between them that, if she takes the leap, she might be able to fan into a flame. This leads to a crash and burn, and that’s all shy Alex needs to catch the hint never to take the risk again.

However, with undeniable timing, Rix’s ex, who broke his heart, and Alex’s family, who spent her lifetime breaking hers, rear their heads, gearing up to offer more drama. With the help of some matchmaking friends, Rix and Alex decide to face the onslaught together…

As a fake couple.

An Exclusive Interview With Kristen Ashley:

For this newsletter, Alex and Rix decided they wanted to interview Kristen and take over for Jillian. So, hope you enjoy!

Rix and Alex: First, we want to say thank you for getting us together…even if it did start out as “fake”. So, thank you! Next, we’re dying to know…how did you know we would be the perfect match?

It started because you both love the outdoors. The instant I saw you together, even though Alex was being shy, and Rix, you were being clueless. [Rix grimaces at the truth of that], I thought. “Hmm, could these two…?”

It bloomed from there. The more I thought about it, the more you gave me of yourselves, the more I saw the beauty you could have. And I couldn’t wait to explore it and give it to you.

Alex: Ok, now that we’re talking perfect matches, what are some of the traits you love to see in a hero (bookish or real life)?

Well, Rix showed me a new one in Taking the Leap. He owned his own shit. He had weighty things messing with his head, he was acting on those in not-great ways. But when finally confronted with them, it wasn’t about denial and angst and miscommunication. He listened to the people who loved him and were concerned about him, he took on board what they were saying, and he sorted himself out.

Rix: What’s the coolest place YOU’VE ever spent the night?

I recently went on a trip to Sonoma with my girlfriend Beth. She found us this crazy boho pad in this tree-filled, hilly area. And the way this house was built, with all its many windows, it was like sleeping in a treehouse. It was pretty awesome.

Alex: Was there any part of our story that made you cry?

Yes. The end of the Prologue and then when Rix finally works it all out. I was a mess when Rix was coming to understand he needed to follow his heart, no matter the risks. And it wasn’t just the power and the courage of that, Alex. It was your quiet support of him in doing that. No recriminations, no interruptions. You listened, you let him get it out and then…done. I loved that for both of you.

Rix: Was there any part of our story that you found unexpected?

Alex was very unexpected for me. I, too, fell into the trap of thinking she was just shy, when she was far, far from one-dimensional. She taught me something about myself, and others like us. I’m what I call an extroverted introvert. I can be social and love to be social with people I know, but with people I don’t, I tend to be reserved and can even be cripplingly shy. Alex taught methat introversion is just a part of who we are. And that’s not just okay, we should own it and settle into who we are because we’re pretty danged awesome.

Alex and Rix: Whose side are you on when it comes to picking what to binge watch next?

Alex. She has good taste.

Oh, and Rix, you need to read the binder!

Alex and Rix: So, what kind of dog are we getting?

I don’t know. I think I need to ask my Chicklets. They have a lot of ideas about this kind of thing. I do know one thing for certain, they’ll pick the perfect dog for you.

I just want to say, thank you both for giving your story to me. It was an honor being along with you as it played out. Love you to the depth of my bones!

Kristen Ashley was born in Gary, Indiana, USA and nearly killed her mother and herself making it into the world, seeing as she had the umbilical cord wrapped around her neck (already attempting to accessorize and she hadn’t taken her first breath!). Her mother said they took Kristen away, put her Mom back in her room, her mother looked out the window, and Gary was on fire (Dr. King had been assassinated four days before). Kristen’s Mom remembered thinking it was the end of the world. Quite the dramatic beginning.

Kristen grew up in Brownsburg, Indiana and has lived in Denver, Colorado and the West Country of England. Thus, she’s blessed to have friends and family around the globe. Her family was (is) loopy (to say the least) but loopy is good when you want to write. They all lived together on a very small farm in a small farm town in the heartland. She grew up with Glenn Miller, The Everly Brothers, REO Speedwagon and Whitesnake (and the wardrobes that matched).

Needless to say, growing up in a house full of music, clothes and love was a good way to grow up.

And as she keeps growing, it keeps getting better.