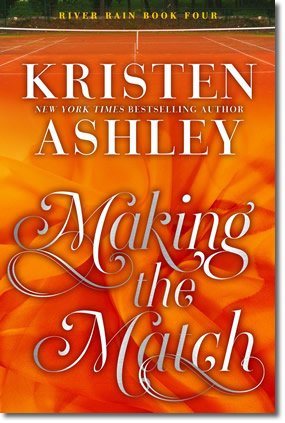 Decades ago, tennis superstar Tom Pierce and “It Girl” Mika Stowe met at a party.

Mika fell in love. Tom was already in love with his wife. As badly as Tom wanted Mika as a friend, Mika knew it would hurt too much to be attracted to this amazing man and never be able to have him.

They parted ways for what they thought would be forever, only to reconnect just once, when unspeakable tragedy darkens Mika’s life.

A time comes when they’re both unattached.

But now Tom has made a terrible mistake. A mistake so damaging to the ones he loves, he feels he’ll never be redeemed.

Mika has never forgotten how far and how fast she fell when she met him, but Tom’s transgression is holding her distant from reaching out.

There are matchmakers in their midst, however.

And when the plot has been unleashed to make that match, Tom and Mika are thrown into an international intrigue that pits them against a Goliath of the sports industry.

Now they face a massive battle at the same time they’re navigating friendship, attraction, love, family, grief, redemption, two very different lives lived on two opposite sides of a continent and a box full of kittens.

An Exclusive Interview With Kristen Ashley:

For this newsletter, the River Rain characters once again take over and Tom and Mika interview Kristen!  Hope you enjoy…

Tom and Mika: First, we want to say thank you for finally getting us together and for telling our love story. But, we’re dying to know…at what point did you realize we belonged together?

I think you both, but especially Tom, can agree that Mika makes an entrance. The moment she formulated in my head, I knew the pairing would be perfect.

And I was right.

Tom: I’d like to personally thank you for giving us another shot at love. Who doesn’t love a second chance?  I also know my story was a little tough to write. What were some of your biggest worries?

I loved you from the beginning, Tom. Even though you hadn’t given me the full story, I knew you were a good man who made a terrible mistake. The challenge was communicating that to my readers.

But also, far more personally, as the books went on, I was very worried about what was going on with Sasha and Matt. And as I don’t plot, how it all came out in the book was how it came to me while writing it. Thus, I, too, had to wait to see if it was going to all work out. And that was nail biting.

Mika: Ok, off of the heavy stuff.  I love my style (thank you for giving it to me!) and am dying to know what a day spent together shopping would look like if you and I had the chance?

I pick shopping in NYC, and I suspect you have all the unique boutiques and great vintage stores mapped out. As such, I see us ferreting out that one-of-a-kind gem or finding the up-and-coming designer who makes fabulous things we’ve never seen before while we make our way through the Only-New-Yorkers-Know places around the city.

Of course, Nora and Chloe would have to come with us.

And obviously, we’d start with brunch and end with cocktails.

Tom: Was there any part of our story that didn’t make it into the book?

No, everything you gave me and then some made it into the book.

Mika: Was there any part of our story that you found surprising?

Hmm…the sexy times were a bit of a revelation.

Tom and Mika: What was a favorite scene from the book (without giving away any spoilers)?

“She has your hair…” everything about that scene, I love it so much, I had to stop writing this so I could go reread it and weep again.

Tom and Mika: What’s next on the horizon for us?

I love thinking about you together. I love the homes you’ll share and the travel you’ll do. I think you’re going to be incredibly happy.

Though, Matt, Sasha and Cadence are all up in the future for making their own matches, so it’ll be interesting to see how you cope with that!

Kristen Ashley was born in Gary, Indiana, USA and nearly killed her mother and herself making it into the world, seeing as she had the umbilical cord wrapped around her neck (already attempting to accessorize and she hadn’t taken her first breath!). Her mother said they took Kristen away, put her Mom back in her room, her mother looked out the window, and Gary was on fire (Dr. King had been assassinated four days before). Kristen’s Mom remembered thinking it was the end of the world. Quite the dramatic beginning.

Kristen grew up in Brownsburg, Indiana and has lived in Denver, Colorado and the West Country of England. Thus, she’s blessed to have friends and family around the globe. Her family was (is) loopy (to say the least) but loopy is good when you want to write. They all lived together on a very small farm in a small farm town in the heartland. She grew up with Glenn Miller, The Everly Brothers, REO Speedwagon and Whitesnake (and the wardrobes that matched).

Needless to say, growing up in a house full of music, clothes and love was a good way to grow up.

And as she keeps growing, it keeps getting better.