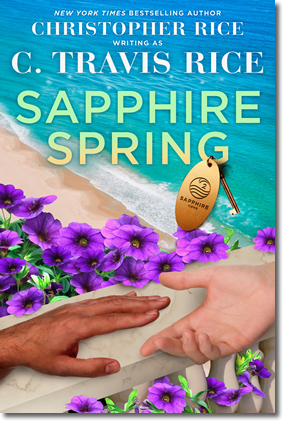 Naser Kazemi has never met a problem a good spending plan couldn’t fix. But working as the chief accountant for his best friend’s resort isn’t turning out to be the dream job he’d hoped for. It doesn’t help that his fashion designer sister is planning an event that just might bring Sapphire Cove crashing down all around them. When the wild party unexpectedly reunites him with Mason Worther, the gorgeous former jock who made his high school experience a living hell, things go from bad to seductive.

The former golden boy’s adult life is a mess, and he knows it’s time to reform his hard partying ways. But for Mason, cleaning up his act means cleaning up his prior misdeeds. And he plans to start with Naser, by submitting to whatever the man demands of him to make things right. The offer ignites an all-consuming passion both men have denied for years. But can they confront their painful past without losing each other in the process?

C. Travis Rice is the pseudonym New York Times bestselling novelist Christopher Rice devotes to steamy tales of romance between men. Christopher has published multiple bestselling books in multiple genres and been the recipient of a Lambda Literary Award. With his mother, Anne Rice, he is an executive producer on the AMC Studios adaptations of her novels The Vampire Chronicles and The Lives of the Mayfair Witches. Together with his best friend and producing partner, New York Times bestselling novelist, Eric Shaw Quinn, he runs the production company Dinner Partners. Among other projects, they produce the podcast and video network, TDPS, which you can find at www.TheDinnerPartyShow.com. Learn more about C. Travis Rice and Christopher Rice at www.christopherricebooks.com.