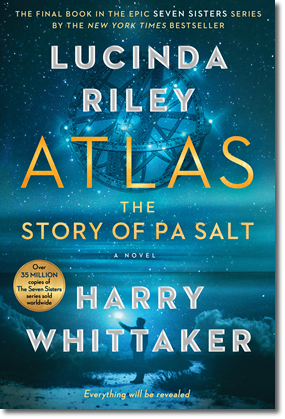 Atlas: The Story of Pa Salt

Over 35 million copies of the Seven Sisters books sold worldwide.

A boy is found, moments from death, and taken in by a kindly family. Gentle, precocious, talented, he flourishes in his new home, and the family show him a life he hadn’t dreamed possible. But he refuses to speak a word about who is really is.

As he grows into a young man, falling in love and taking classes at the prestigious Conservatoire de Paris, he can almost forget the terrors of his past, or the promise he has vowed to keep. But across Europe an evil is rising, and no-one’s safety is certain. In his heart, he knows the time will come where he must flee once more.

The seven sisters are gathered together for the first time, on board the Titan to say a final goodbye to the enigmatic father they loved so dearly.

To the surprise of everyone, it is the missing sister who Pa Salt has chosen to entrust with the clue to their pasts. But for every truth revealed, another question emerges. The sisters must confront the idea that their adored father was someone they barely knew. And even more shockingly: that these long-buried secrets may still have consequences for them today.

Spanning a lifetime of love and loss, crossing borders and oceans, Atlas: The Story of Pa Salt draws the Seven Sisters series to its stunning, unforgettable conclusion.