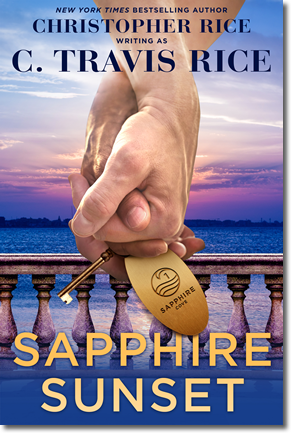 Logan Murdoch is a fighter, a survivor, and a provider. When he leaves a distinguished career in the Marine Corps to work security at a luxury beachfront resort, he’s got one objective: pay his father’s mounting medical bills. That means Connor Harcourt, the irresistibly handsome scion of the wealthy family that owns Sapphire Cove, is strictly off limits, despite his sassy swagger and beautiful blue eyes. Logan’s life is all about sacrifices; Connor is privilege personified. But temptation is a beast that demands to be fed, and a furtive kiss ignites instant passion, forcing Logan to slam the brakes. Hard.

Haunted by their frustrated attraction, the two men find themselves hurled back together when a headline-making scandal threatens to ruin the resort they both love. This time, there’s no easy escape from the magnetic pull of their white hot desire. Will saving Sapphire Cove help forge the union they crave, or will it drive them apart once more?

Something a little different for you guys today! C. Travis Rice interviews Logan and Connor from Sapphire Sunset! Enjoy…

LOGAN: Of course. Unfortunately, I’ve only got fifteen minutes tops. Our security team needs training from the lifeguards in how to recognize a swimmer in distress, so I’m overseeing the workshop in twenty.

C. TRAVIS RICE: Along those lines, is it true you saved a child from drowning yesterday?

LOGAN: It’s true that I did my job yesterday and yesterday my job involved saving a child from a dangerous situation. Yes, sir. I’m just glad everything turned out alright.

C. TRAVIS RICE: Indeed. You seem pretty qualified to be the security director at a beach resort. You left the Marine Corps as a staff sergeant, and I understand you received a Purple Heart in Iraq. What brought you to Sapphire Cove?

LOGAN: Life’s full of twists and turns, but honestly, I first took the job because the benefits were great and we needed to get some health insurance for my old man. He’s stubborn son of a gun who threw his back out kickboxing after his doctor told him to stay off the mat.

C. TRAVIS RICE: Yeah, but wasn’t that five years ago? What’s kept you here since then?

LOGAN: What can I say? After years of helicoptering into combat zones where no one wanted to see us, I enjoy spending my days someplace people love to be.

C. TRAVIS RICE: Sure. And it doesn’t have anything to do with the night you and Connor Harcourt slipped off to the sea caves alone together?

LOGAN: Given the recent headlines about the hotel, I cannot comment publicly on hotel management at this time.

C. TRAVIS RICE: I see. Connor’s your boss now, right? Is that awkward given you guys totally made out five years —

LOGAN. I repeat. I cannot comment publicly on hotel management at this time.

C. TRAVIS RICE: Alright, then, next question. What’s it like being seven feet tall?

LOGAN: I’m six foot four, but thanks for the complement, I guess.

C. TRAVIS RICE: Oh, look. Here comes your new boss. Think you can get Connor to come over here and answer some questions?

LOGAN: Actually, I can see that despite my directive, he’s moving about the grounds without a security detail, so I’m going to have to accompany him wherever he’s going. If you’ll excuse me…

C. TRAVIS RICE: Is that your job? Escorting your boss everywhere he goes?

LOGAN: It is now.

C. Travis Rice is the pseudonym New York Times bestselling novelist Christopher Rice devotes to steamy tales of romance between men. Christopher has published multiple bestselling books in multiple genres and been the recipient of a Lambda Literary Award. With his mother, Anne Rice, he is an executive producer on the AMC Studios adaptations of her novels The Vampire Chronicles and The Lives of the Mayfair Witches. Together with his best friend and producing partner, New York Times bestselling novelist, Eric Shaw Quinn, he runs the production company Dinner Partners. Among other projects, they produce the podcast and video network, TDPS, which you can find at www.TheDinnerPartyShow.com. Learn more about C. Travis Rice and Christopher Rice at www.christopherricebooks.com.